Its only Asthma, right?

Antonia Thomas was just 10 years old when she died of an Asthma attack.

Antonia was a happy, lively girl who loved life. Although she had been diagnosed with asthma in the past and had recently had a routine check, shed never experienced an acute asthma attack; yet, on 17th October 2009 she passed away within minutes.

Antonias story is tragic but far from an isolated case. Every 10 seconds somebody has a life threatening attack and the number of children that die from Asthma every year could fill a classroom.

Which naturally raises the question. Why is such a severe condition perceived by many as Only Asthma and could or should it be taken more seriously?

Since Antonias passing, her Father Jeff Thomas, a businessman from Corsham, made the courageous decision to begin tackling Asthma head on by helping to raise awareness and much needed funds for research; but more importantly, to build a legacy in his daughters name.

(You can hear former Sky News presenter Allan King interview Jeff and the other Ruck & Rollers; just click the radio player buttons at the bottom of this article.)

Jeff, together with a small group of close friends, began this work with the formation of Antonias Riders Club which undertook a number of fund raising cycling challenges. Originally we formed the group out of a general sense of helplessness says Jeff. There was nothing that we could do to turn the clock back but we knew that we needed to do something to honour Antonias life and provide a better outcome for Asthma sufferers today.

Incredibly, Jeff, his family and friends have raised around 100,000 through their fund raising work and this is just the beginning.

This year will mark the 6th Anniversary of Antonias legacy and in just 4 weeks time, Jeff together with some well-known friends and colleagues are taking on their biggest challenge to date.

On June 20th, John Hall, former Rugby Bath and England international and close friend of Jeff will be leading a group of 16 riders and 22 crew called The Ruck and Rollers to take on one of the most gruelling sporting challenges in the world; the Race Across America (RAAM) to raise money for the charity Asthma UK. 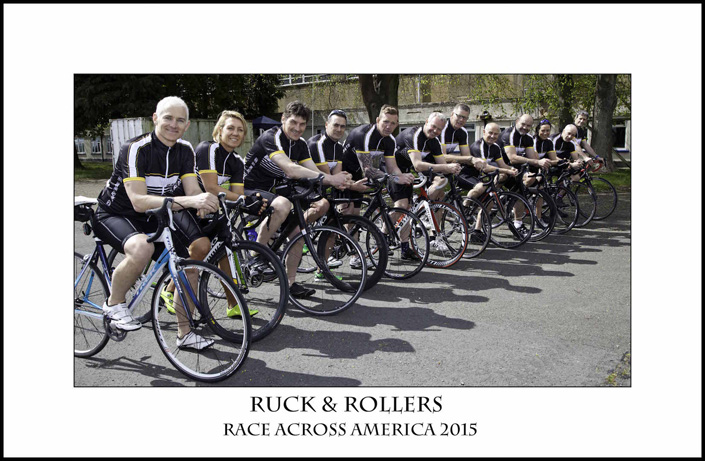 RAAM is one the most respected and oldest endurance sports events in the world. It is held aloft as the pinnacle of athletic achievement not only amongst the cycling fraternity but in the wider sporting community too.

It also has an interesting history. In 1982 four individuals raced from the Santa Monica Pier in Los Angeles to the Empire State Building in New York City. National television covered the race and it soon captivated the publics imagination. In 1992 the option to introduce teams was added and this quickly became the most popular and fastest growing element of the race, teams in relay made it accessible to any fit cyclist.

The Ruck and Rollers comprise two teams made up of eight former rugby internationals and eight amateur riders; the rugby internationals are John Hall, Warwick Waugh, Rob Wainwright, Damian Cronin, Alix Popham, Colin Charvis, Denis McBride and Paddy Johns and to add in an extra bit of competition into the mix, theyve split the teams into the under and over 50s.

Both teams will have four rugby players each, plus four additional riders who will be supported by a crew of 22 people; all there to make sure that the riders make it from one side of America to the other as safely and quickly as possible.

Their goal will be to cover 3,000 miles in just 7 days and raise much needed awareness and funds for Asthma UK.

On average three people die every day from Asthma in the UK and tragically studies show that two thirds of these deaths could be prevented, clearly demonstrating the need for Asthma to be taken more seriously; better treatments made available and its profile raised.

Jeff and his family have shown immense courage and humility, taking what is clearly a personal tragedy and using their story to help other Asthma sufferers and their families; doing something positive and meaningful. However, there is still a long way to go and as Jeff explains he is just at the beginning of building his life with Antonia since she has passed.

Antonia was a beautiful, energetic, loving, considerate and enchanting girl and we all miss her every day. Our hope is that her life and now her legacy will serve as an inspiration to others and ensure that Asthma is taken seriously.

Jeff continues, Our work and specifically these challenges provides important funds that could one day contribute to finding a cure and in turn change and save many lives. It is a fitting legacy to our wonderful and much missed daughter.

If you could like to donate to the Ruck and Rollers or help them with their fund-raising, please visit: www.ruckandrollers.com